Note: This article was published 1974 in the 50th Anniversary club booklet.

Fifty [now 91] years ago in 1924, the New England Sled Dog Club, Inc. was organized in Wonalancet, New Hampshire at Wonalancet Farm, the home of Mr. and Mrs. Arthur Walden. 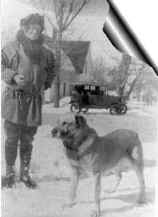 Arthur Walden was a man interested in adventure, outdoor activities, and the Far North. He had traveled the gold-rush country, has seen dog teams used for transportation, and had become enthused about this unique method of travel. When the opportunity arose for him to acquire some dogs that seemed to adapt themselves to dog sledding, he started breeding for a team. The original Chinook was a large golden yellow dog of mixed background, with an unusual amount of intelligence. When Chinook had been borne as one of the litter of three, Mrs. Walden, an admirer of Rudyard Kipling, had named the three puppies Rikki, Tikki and Tavi. When Mr. Walden returned from Alaska where Rikki had become his lead dog, he changed his name from Rikki to Chinook which means “warm west wind.” Two females arrived at the farm, also of mixed origin. These females were both bred to Chinook. Mr. Walden kept all the yellow dogs for his team. This team was the start of sled dog racing in New England. These dogs were large, strong and capable. Mrs. Walden ran the Wonalancet Farm as an inn which was well-known and a “high-class” place to stay. Dog team rides became one of the attractions at the Inn.

In the early 1920’s the Brown Paper Co. at Berlin, New Hampshire organized an International Race to be held near the boarder of Canada which attracted much of notice in the Boston and New York newspapers. Two Canadian and two United States teams entered this race. The race was held for three days, averaging 39 miles per day. Arthur Walden, with his lead dog Chinook, driving a single hitch of nine dogs, won the race. The publicity was nation-wide, and Walden and Chinook became famous overnight.

Enthusiastic fans of Arthur and Chinook gathered at Wonalancet Farm to form a club to promote this new sport of sled dog racing. This club became the NEW ENGLAND SLED DOG CLUB. The constitution and By-Laws were adopted November 5, 1924. Arthur Walden was chosen for the first president, Dr. Harry Souther of Boston, Charles DeForest of New Haven, Everett Rutter of Derry Village, N.H. Percival Estes of Meredith, Styles Oxford of Maine, and Dustin White of Vermont were selected as vice-presidents in order that all the New England areas would have representatives in the new organization. The first secretary-treasurer was Claude Calvert of Meredith, New Hampshire. Dr. Souther was appointed to the position of Chief Judge. The first official meeting after the idea got off the ground was held at the office of Walter Channing in Boston. According to a report in the Boston Transcript there were sixty charter members.

In the winter of 1925 the newly formed club sponsored two races for “green dogs and green drivers”. The races were held in Newport, New Hampshire, and Meredith, New Hampshire. The drivers were Hi Mason, winner of the Newport race, Walter Channing, winner of the Meredith race, Caryl Peabody, the late Mrs. Fred Lovejoy, from Massachusetts, Percy Estes driving a Meredith team, Richard Stearns, and Clara Enebuske, now Mrs. Richard Read of Wonalancet, New Hampshire. Mrs. Edward Clark would have raced with her team of Eskimo Dogs, but she did not qualify as a “green driver.” 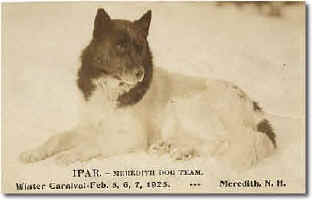 Photos courtesy of Karen Jones/Nerak Kennels, Tamworth, NH. From the collection of her grandfather, Hi Mason.

In 1926 there was a race held at Poland Springs, Maine which was won by Arthur Walden. In second place was Walter Channing, Ed Clark was third. Two other entrants. Phillip Molloy and Clara Enebuske withdrew the second day due to dog problems. The following year, at Poland Springs, LEONARD SEPPALA, hero of the serum drive to Nome, won the race with a team of Siberian Huskies; much to everyone’ surprise. In that era of racing, big dogs were considered to be superior racers.

During the years from 1926 to 1928 point to point races were held in which teams started in one town, drove to another town, started there the second day and drove to a third town to finish the race. These races attracted quite a few Canadian teams and competition was keen. In 1926 the race ran from North Convay, and first day finish was in Wolfeboro: the second day’s finish was at Ashland: and return to North Convay for the finish of the race. The competitors were: William Grayson, J. Dupuis, E.T. Clark, Shorty Russick, Arthur T. Walden, Walter Channing, E. Brydges, Henri Skeene, Emil St. Goddard, F. Dupuis and P. Molloy. First prize was $1,000 and “Shorty” Russick was the winner. Three days mileage was about one hundred forty miles.

In 1927, the race ran from Wolfeboro to Ashland on the first day, Ashland to North Convay the second day, and North Convay to Wolfeboro on the third and last day for a total of 133 1/2 miles. The winner that year was Leonard Seppala, and the first prize was again $1,000. Other entrants were: Emil St. Goddard, Theodore Kingeak, Hiram Mason, Walter Channing, Arthur T. Walden, Victor Lavigne, Francois Dupuis, Joe Dupuis and Phillip Molloy. 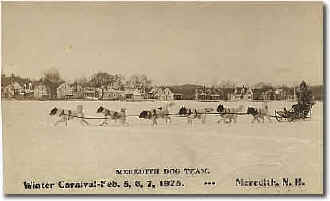 Photos courtesy of Karen Jones/Nerak Kennels, Tamworth, NH. From the collection of her grandfather, Hi Mason

Arthur Walden and Chinook went with Admiral Byrd to the South Pole on the first Antarctic Expedition. During his absence the club began to deteriorate. Mr. and Mrs. Milton Seely had come to Wonalancet to live and at this time took over the operation of Chinook Kennels and Wonalancet Farm. Walter Channing, a member of the original organization urged the Seeleys to reorganize the club and start it rolling again.

Races were held in various New England towns each winter until, because of our involvement with World War II, gas rationing and other restrictions brought racing to an end “for the duration”.

Many of the owners of Siberian Huskies either sold or donated their dogs to the Air Sea Rescue unit of the war effort, where under the direction of Colonel Norman Vaughan, and other service personnel, such as William Shearer III, William Bettete, and Tat Duval (to mention a few) the dogs were trained to meet the problem of rescuing the crews of downed aircraft in Greenland, Baffin Island, and other northern spots. Some dogs were shipped to Europe with the idea of evacuating the wounded from the Battle of the Bulge. This never became a necessity. These dogs that were returned were awarded a Honorable Discharge.

It looks as if sled dog driving is here to stay. The greatest hazard it faces is the lack of land suitable to accommodate the increased number of members; and suitable for dogs to race on. Only time can tell us what the future will bring.

This message is only visible to admins.